We recently launched ‘GOGO Music Nights’ with successful events in South Africa at El Nino (Mafikeng), House 22 (Pretoria), La Cadi (Soweto), The Point Pub & Grill (Vosloorus) and have more of them coming up soon! The line-up for our SA editions usually consists of Ralf GUM, Sir LSG, Themba and guests. 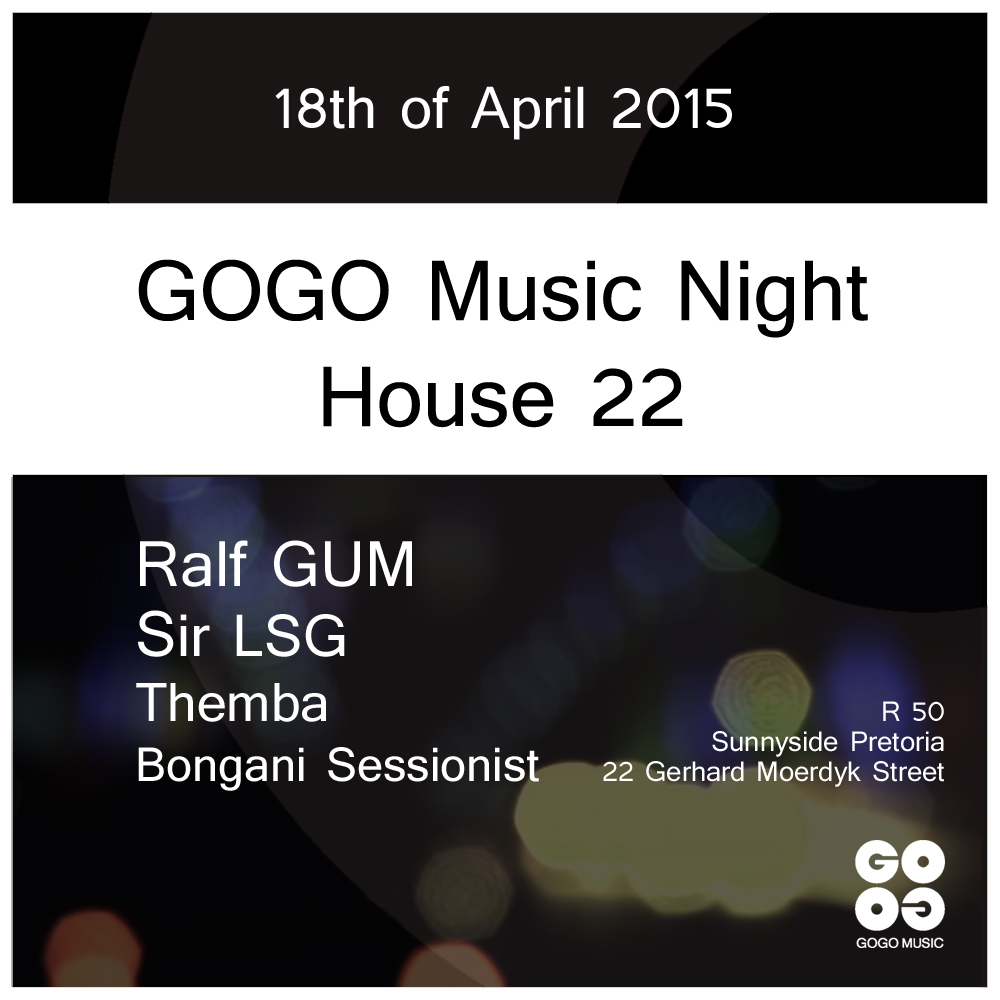 These events quickly became a firm favourite of real music lovers in Mzansi. Promoters interested in hosting a ‘GOGO Music Night’ please get in touch with B-King.

We kicked off our regular GOGO Music residency at Kitcheners in Braamfontein, Johannesburg on the 14th of April 2016.

Aptly named ‘CORE’, Ralf GUM, Sir LSG and Themba will take you to the core of House Music with long DJ sets. A sonic journey created by DJs controlling the energy over several hours, has always been an important part of House Music culture. While on the opening night the triumvirate will share the decks and time, thereafter 2 of us will entertain the crowd on every 3rd Thursday of the month, as the purpose is to go back to the roots, when resident DJs used to play for the whole night.

The intention is to keep House Music culture in the world’s hotbed for the sound, which is South Africa, alive and growing. This new venture is as well started to add something fresh, exciting and regular to Johannesburg’s nightlife.

GOGO Music is a premiere platform for innovative and soulful club music. Founded in 2001 by Ralf GUM the label is considered one of the worlds-most successful independent House Music stables since many years and has played a massive role in the deep house culture of Mzansi, too.

By presenting CORE, GOGO Music follows a clear path where real music is the focus and of course hopes to celebrate amazing nights with like-minded open-minded people.

GOGO Music & House Afrika, two key-players amongst South Africa’s House Music stables, and Hit Refresh come together to create an exceptional atmosphere at Tropicana Lounge in Bloemfontein on Saturday the 10th of October. With top sound, slick production and a tight line-up this is definitely the go-to event on the Macufe Saturday if you’re into this thing called House Music.

House Afrika has been at the forefront of the South African dance scene for two decades and remains there, with a discography that included sensations like DJs At Work, Oskido, DJ Fresh, Liquideep, Chymamusique and Nastee Nev.

GOGO Music is a premiere platform for innovative and soulful club music and has played a massive role in deep house culture in Mzansi with its releases from label boss Ralf GUM and collaborators like Monique Bingham, Raw Artistic Soul and locals like Black Coffee, Bucie, Christos and Zano.